A recent series of 75th anniversaries celebrated by ski resorts across the country, from Shawnee Peak in Maine to Timberline in Oregon, points to a phenomenon that is the subject of a new exhibit at the New England Ski Museum, titled Ski Area Survivors: Prewar American Ski Centers with a History. In the 1930s the concept of a ski area was new, based on the recent invention of ski tows and aerial lifts for skiing and, new ski areas were opening up rapidly. By the latter half of the decade a handful of American ‘ski centers’, to use the term of the day, had emerged that are recognizably modern, and the foremost among them approached the scale of resorts found in Europe at the time. 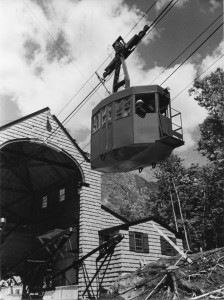 The ten principal ski areas of the prewar years shared most of the features that came to define the concept of a ski resort: maintained ski slopes or trails; a state-of-the-art ski tow or aerial lift; nearby or on-site lodging accommodations; professional ski instruction; and provision for a ski patrol. In many cases, these prewar areas were the venue for national ski meets.

Sun Valley in Idaho, opened in the winter of 1937 by the Union Pacific Railroad, was the earliest and most developed of the ski areas of the 1930s, and became a prototype for other American ski centers. It directly influenced developments at two New Hampshire locations, Belknap Recreation Area (now Gunstock) in Gilford and Cranmore Mountain in North Conway in succeeding years.

Whitney’s (now Black Mountain) in Jackson, New Hampshire, Pico in Mendon, Vermont, Mount Mansfield in Stowe, Vermont, and Cannon Mountain in Franconia, New Hampshire round out the list of eastern areas that were the most significant of the prewar skiing universe. In the west, Mount Hood, Oregon with its majestic Timberline Lodge, Alta, Utah, Sugar Bowl, California, and Sun Valley were the major resorts of the day. 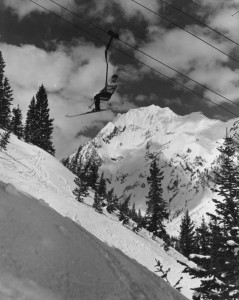 The first chairlift at Alta opened on January 15, 1939, though it was unreliable in its first season.

Beside these leading ski resorts, dozens of other smaller areas with rope tows and T-bars had opened in the years before the United States entered World War II. The National Ski Areas Association, the trade group for ski areas in the US, lists more than 40 areas that date back before the war but did not have status as a major resort at the time. Some of these, like Aspen, Winter Park and Steamboat in Colorado, and Snow Basin and Deer Valley, Utah, have since become some of the largest ski resorts in the country.

The somewhat surprising premise of the exhibit, that at least 60 American ski areas dating back to the 1930s or earlier are still operating today, contrasts sharply with the doleful lists compiled by the New England Lost Ski Area Project website (www.nelsap.org) that document the closure of nearly 600 mostly small-scale ski areas in New England. Visitors to the new exhibit, Ski Area Survivors: Prewar American Ski Centers with a History, should come away with an appreciation of these ski area survivors that can all be skied today.