The 2013 New England Ski Museum Shop catalog is now in print and online, featuring more than 35 new products that convey the excitement, adventure and nostalgia of skiing from the 1930s to 2012. The 24-page catalog offers perfect gifts for skiers and lovers of winter, and quite a few of the products are exclusive to the museum, developed using posters, photographs, films and archives from the broad collections that are a feature of the organization. 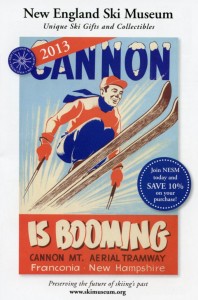 New England Ski Museum is set apart from other American ski museums by the extent of their collections, housed in the Paumgarten Family Archival Center a short distance from the museum itself. The collections are used by the museum’s directors, staff and members to produce original works on the history of the sport ranging from the internationally-known academic studies of E. John B. Allen to the surreptitiously educational, hilarious blooper-reel DVD Thrills and Spills in the North Country produced by Rick Moulton. Director Jeremy Davis’ most recent book, Lost Ski Areas of the Southern Adirondacks, is one of several new books that appear in the catalog.

More skier gifts can be found on the museum’s website, including two books by members that will be available soon. Henry Yaple’s Never A Bad Year for Snow tells the history of 75-year old Lost Trail/Powder Mountain, a local sleeper ski area in western Montana, while closer to home, Tom Eastman’s 75-year history of Cranmore Mountain Resort is expected in mid-January.

The catalog cover, a bold, dynamic image of a skier in a terrain jump crystallizes the vivid style and passion for the sport that characterize ski area posters in the 1930s and 1940s. The poster was developed as a shop product as a result of an exhaustive review of collections in the process of renovating the museum’s permanent exhibit in the summer of 2012.

There was a time, about 15 years ago, when neckties were the largest seller in the museum’s catalog. Several ties with ski motifs still appear in the catalog, but the title for most popular product these days is held by hooked wool pillows, stockings and rugs by Chandler 4 Corners of Manchester, Vermont, with a variety of skiing scenes.

New DVDs in the catalog show unbelievable skiing scenes from the local—Mount Washington in the new Warren Miller film Like There’s No Tomorrow—to the Himalayan—in the mind-boggling concept behind Skiing Everest.

The shop catalog is one of the methods that the non-profit New England Ski Museum uses to support itself. All proceeds from catalog sales go to support the museum’s mission to preserve and disseminate the history of skiing.