For the first time in many decades, the New England Ski Museum has 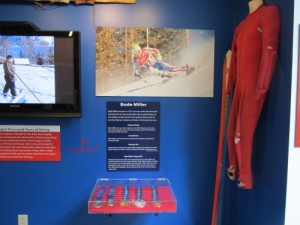 revamped its permanent exhibition, those images and artifacts that stay on view from year to year while the museum’s shorter-term displays frequently change. The new exhibition, titled “From the First Tracks to the Fall Line: eight thousand years of skiing”, presents a coherent chronology of the development of skiing from its prehistoric roots up until the advent of the shaped ski in the 1990s, and includes local aspects of ski history with national implications such as several important ‘firsts’ at Cannon Mountain, and the career of Bode Miller.

“For years, when an important or interesting object came to the museum, it was placed on display where it would fit physically, not necessarily where it fit chronologically,” noted executive director Jeff Leich. “These renovations will give our visitors a much more logical sense of how skiing developed.”

The ski museum’s overhaul was made possible partly though a grant from the Institute of Museum and Library Services (IMLS), the agency that channels federal support to museums. IMLS seeks to create strong libraries and museums that connect people to information and ideas.

The exhibition quickly focuses in on the transplantation of skiing from Europe to New England, and especially on the rapid growth of the sport and the fledgling businesses built around the sport in the 1930s. One important aspect of that decade was the creation of the National Ski Patrol to provide first aid to injured skiers, and the NSP in turn was a key advocate of the US Army’s mountain troops that became known as the 10th Mountain Division. Following the Second World War, veterans of the 10th were hugely significant in opening ski resorts around the country.

A 12-foot wide photomural of Tuckerman Ravine in the winter of 1969, noted as the snowiest on record there, closes out the exhibition, and visitors photographed standing before the mural appear to be in the ravine themselves. The Museum is open from 10 to 5 from Memorial Day until the end of ski season.
Back to Top