Many New Englanders know of the 10th Mountain Division, the US Army unit that trained on skis and in the mountains of Colorado in World War II, and eventually saw combat in Italy for a short but exceedingly intense time in 1945. The ranks of the mountain infantry regiments that made up the 10th contained many men who grew up skiing in New England, but for the most part their training activities all took place in the American west.

There was however one brief foray into New England in the fall of 1942 by a small group from the 87th Mountain Infantry, the first of the three regiments that would make up the 10th. The geographic anomaly of this detachment to Lincoln New Hampshire was not the most remarkable aspect of its short existence though. While it is generally agreed that the 10th’s wartime contribution came in the waning months of the struggle, there is an intriguing hint that the Lincoln Detachment may have had an influence on the course of the war as early as 1942, when the Allies invaded North Africa.

The 87th was formed at Fort Lewis, WA in the winter of 1941-42, comprised of men (selected, in a unique army recruiting practice, by the National Ski Patrol) who had experience in skiing, climbing, or other outdoor pursuits. In the early fall of 1942, a select group of 10 officers and 32 enlisted men was sent east to Lincoln, with the mission of providing mountaineering instruction to troops of the 36th Division, made up of Texas and Oklahoma soldiers. “We came in a troop train through the Dakotas. I remember the cowcatchers of the trains were loaded with pheasants, which broke our hearts,” recalled Ralph Ball of Carbondale Colorado. Arriving at Camp Edwards in Massachusetts, the 87th men were briefed by a general who emphasized the top-secret nature of their mission. Ball grew up in Deerfield Massachusetts, and like other New Englanders in the detachment, knew where they were when they reached Lincoln, where they were housed in the Lincoln Hotel. Security was unusually tight, and soldiers were not allowed to call their families no matter how close home might be.

Their days were spent in Franconia Notch, conveying the basics of mountain travel and rock climbing techniques like rappelling and belaying, to the Texans of the 36th. Climbing practice was held on the slabs of Cannon Mountain below the Old Man of the Mountains. The large, blocky talus below the cliffs of Cannon provided challenging terrain for unroped mountain travel. The steep hiking trails on the east side of the notch leading to the AMC Greenleaf Hut were the scene of mock ambushes on the Texans staged by the instructors from Fort Lewis. 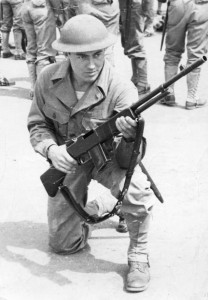 Gordon Lowe, a member of the Lincoln Detachment of the 87th, in the World War I-era uniform he was issued when he enlisted in early 1942

“They paid serious attention,” says John Reid, now of Vancouver, Washington. “Some of our guys were really very talented. We taught a lot on mountain survival and how to avoid foolish risks with these nervous flatlanders. The talus on Cannon was quite loose and I can remember the Texans had a few surprises as small slides started. I can tell you it felt so good to me to be in the mountains of New Hampshire again.” Reid, who grew up in Adams, Massachusetts and learned to ski on Mt. Greylock, taught skiing for the Hannes Schneider Ski School at Pinkham Notch Camp at the base of Mt. Washington just before the war.

He also recalls the comfortable change from Army routine at the Lincoln Hotel: “We were fed the best food you could ever imagine, served on white linen tablecloths in their fine dining rooms. And, it was the height of October foliage and the valley and surrounding mountains were classically beautiful; it was all too good to be true.”

But there was another aspect to the 87th’s stay in Lincoln that did not involve mountaineering. During the afternoons or evenings they were taught elementary phrases in Norwegian. Reid remembers a Norwegian instructor from Harvard, while Ball had teachers he understood were Norwegian patriots from New England. Gordon Lowe of North Hero Vermont, another member of the detachment, remembers a schoolteacher from Washington DC as his language instructor. “The whole idea, we thought, was that maybe we were going to invade Norway,” says Ball. “We thought that our group might be headed for the fiords of Norway to set the ropes for an invasion,” remembers Reid. 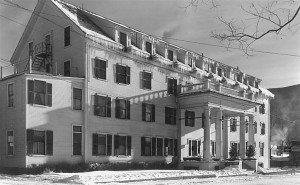 The Lincoln Hotel, where members of the Lincoln Detachment were billeted in the fall of 1942

The idyllic fall in Lincoln came to an end for the detachment from the 87th on November 4, 1942, when orders came to return to Camp Edwards. There the detachment broke up, with some like Ball and Reid heading to Camp Hale Colorado, the 10th’s training base just being built, and others like Lowe continuing on detached duty as mountaineering trainers in West Virginia.

Four days after the orders were written, Allied troops invaded North Africa in Operation Torch. There would be no large-scale Allied invasion of Norway. A postwar official Army report sheds some light on the mission of the 87th in Lincoln: “The purpose of the program was not primarily the training of the 36th Division but was a part of an elaborate intelligence plan to persuade the Germans that an invasion of Norway was in prospect. The deception succeeded and caused the Germans to move troops to the north at the exact moment that U.S. and British troops were moving towards North Africa.”

The Lincoln detachment’s fall in the White Mountains occurred near the beginning of American combat in the war, and in the succeeding years of war was mostly forgotten by the men who served in it, and probably by those who went through the training with the 36th Division. That unit suffered heavy casualties in Italy, most notoriously at the Rapido River, where they were ordered to cross against heavy enemy forces holding high ground. The history of the 10th in Italian combat in 1945 and its subsequent influence on postwar skiing is well known. The 87th’s prelude to war in Franconia Notch among the fall foliage of 1942 deserves to be remembered as well.