The emergence in Vermont of skiing as a popular pastime and engine of winter economic growth is the topic of a new annual exhibition at the New England Ski Museum. The exhibit, Green Mountain, White Gold: Origins of Vermont Skiing, will officially open on May 30, 2014 with a reception from 5 to 7 PM for members and friends of the Museum. The exhibit will be in display through the end of the 2015 ski season.

The Woodstock Inn first opened in the winter in 1892, as hotelkeeper Arthur Wilder sought to attract a fraction of the tourists that flocked to the state via rail for long visits in the summer. Snowshoeing, ice skating, and some limited touring on skis were the popular winter pastimes in Woodstock for the next four decades. In 1934, another pair of Woodstock innkeepers, Robert and Elizabeth Royce, facilitated the first rope tow in the country, freeing skiers from the need to climb. 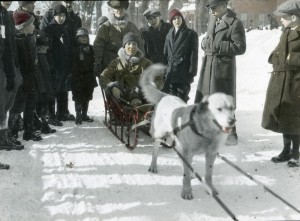 Fred Harris, seated in the dogsled in this 1920s photo, masterminded events at the Brattleboro Outing Club. Arthur Walden, standing behind, was the owner of Chinook Kennels and brought sled dog team racing to the northeast after a stint in Alaska.

Despite its primacy in time, Woodstock was soon overshadowed by the city of Brattleboro, the home of Fred H. Harris, who was enthralled by skiing as a youth. Harris had a major talent for organization, and was personally responsible for the founding of the Dartmouth and Brattleboro Outing Clubs, both of which introduced thousands to skiing. The Brattleboro Outing Club’s ski jumping tournaments attracted spectators in the thousands to the 1920s and 1930s version of today’s X-Games. Best known for these huge jumping audiences, Brattleboro skiers also initiated an early junior ski program, built a 40-mile cross-country ski trail, and helped build a downhill ski area at Hogback Mountain. With the rise in interest in Nordic skiing, the Putney area near Brattleboro produced scores of competitive cross-country skiers, including Bill Koch, the first American to have won an Olympic medal in cross-country and the overall Nordic world cup championship. 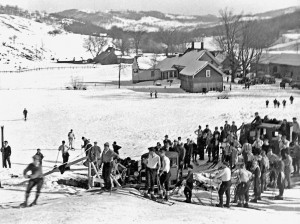 The first rope two in the United States was on Gilbert’s Hill in Woodstock, Vermont.

The state of Vermont provided substantial assistance to emerging ski areas, always within the context of boosting, not preempting, the role of private enterprise. State forester Perry Merrill was a constant presence from the 1930s through the 1960s, arranging for the Civilian Conservation Corps to cut ski trails during the Depression, and after the war leasing state mountain lands to ski area builders and working with the legislature to appropriate state highway funds for ski area access roads. From the legendary Nose Dive, the 1934 CCC trail cut on Mount Mansfield, to the construction of roads that made possible the development of Killington, Mount Snow, Okemo, Stratton Mountain and others in the 1960s, Perry Merrill was a consistent force in developing skiing in Vermont.

In contrast to the open, low-elevation pastures of Woodstock where lift-served skiing got its start, by the 1960s Vermont ski areas were built on some of the highest mountains, and areas like Glen Ellen, Sugarbush, Mad River Glen, Killington and Mount Mansfield became known for  their major vertical drops and expansive trail networks. 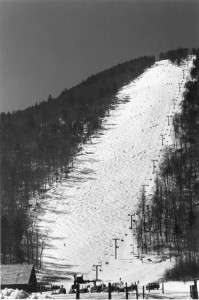 The early pioneers of Vermont skiing could not foresee that the sport would produce something like Bear Mountain at Killington.

As the economic hard times of the early 1950s in rural Vermont gave way to 1960s prosperity, new forms of skiing and new institutions appeared on the scene. Nordic skiing grew phenomenally in the 1970s, and the earliest Nordic touring center was born at the Trapp Family Lodge in Stowe. The concept of ski racing academies arose at Burke Mountain in 1970, and spread rapidly around the state, then the country. The germination of the largest snowboard manufacturer in the world came about at Stratton Mountain, where Jake Burton Carpenter began building snowboards in Emo Heinrich’s wood shop.

The proliferation of skiing-related endeavors that swept the state of Vermont would be an unimaginable wonder to Fred Harris, who just wanted to get outside in the winter, and a likely source of quiet satisfaction to Perry Merrill, who opened the state forests to skiers.