New Hampshire was the center of skiing in the United States from the 1930s into the 1950s. Skiing first became popular in northern Europe then crossed the Atlantic to the cities of New York and Boston. Because New Hampshire was so close to Boston, skiing became very important to New Hampshire.

Three groups of people were important to skiing growing in New Hampshire. First, the workers from Scandinavia who moved to the paper mills around Berlin. Second, college students from Dartmouth College who were part of the Dartmouth Outing Club. And third, people who were members of the Boston-based Appalachian Mountain Club.

New England skiers started skiing on barnyard hills, pastures, and carriage roads, but soon needed ski trails made just for skiing. The Appalachian Mountain Club began this in 1927 when they improved the Wapack Trail that went from Mount Watatic to North Pack Monadnock. The Winnipesaukee Ski Club cut a ski trail over Mount Belknap in 1931. 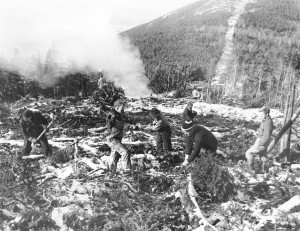 A year later work began on a new ski trail from the summit of Cannon Mountain. This trail, The Richard Taft Trail, was designed by Duke Dimitri von Leuchtenberg, who was teaching at Peckett’s Inn on Sugar Hill. The Taft Trail was the first to be attempted on a 4,000 foot mountain and took 2 years to complete. After this, many ski trails were built all over New England. You can still ski on the Taft Trail today at Cannon Mountain.

Many important downhill racing events were first held in New Hampshire. The first, in 1925, was a slalom course set up at the Dartmouth Winter Carnival by a professor, Charles A. Proctor. It was a very short course that used pine branches to mark where to turn. The second event was a downhill race on Mount Moosilauke that was held on a carriage road. Most people think of this as the first modern downhill race in the United States. Charlie Proctor, the son of the professor, won both of these races. He was a member of the Olympic team in 1928. 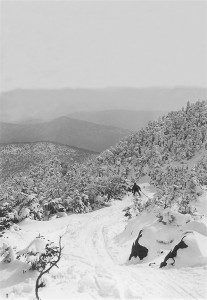 A downhill race on the Mt. Moosilauke Carriage Road, 1929

Many of the trails in New Hampshire were too difficult for the skiers of that time. There were injuries and some deaths. After Franklin Edson III of New York died his wife and Dick Durrance, a famous Dartmouth skier, helped plan a new race at Tuckerman Ravine that would be both fast and safe. They borrowed an idea from Europe that put a few control gates on a downhill course. This is now known as a Giant Slalom. 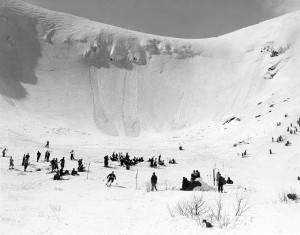 The first Giant Slalom race in the US, April 4, 1937 in Tuckerman Ravine

Even though the first rope tow in the United States was in Woodstock, Vermont, many new ideas for getting skiers up a mountain were developed in New Hampshire. Two new style rope tows opened in 1936. The Dartmouth Outing Club built one on Oak Hill in Hanover and the second one was built at Moody’s Farm in Jackson. These used wire instead of fiber to make the rope. This rope was then suspended above the skiers’ heads rather than at waist level. The skier grabbed a J-shaped handle that was attached to the rope and was pulled up the mountain. 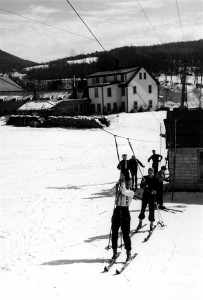 The first chairlift in New Hampshire was built in 1937 on Rowe Mountain in Gilford, just a year after chairlifts were invented in Idaho. The next year, 1938, two exciting and new ski lifts were built. One was at Cannon Mountain in Franconia and the other was at Mount Cranmore in North Conway. 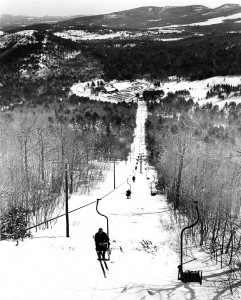 The first chairlift in the Eastern U.S. at Belknap Mountain, now called Gunstock.

Cannon Mountain built the Cannon Mountain Aerial Tramway. A tramway is a large box that hangs from a cable. Many people can board a tram and travel to the top of the mountain together. Many people thought that trams would be the most popular ski lifts in America, but chairlifts became cheaper to run and easier to fix. 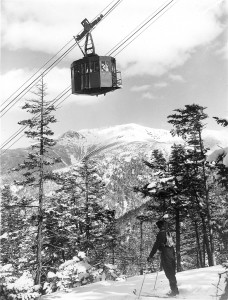 The Cannon Tramway wasn’t the first tram in America, but it was the first built to carry skiers to the top of ski trails. The tram at Cannon now is a new one built in 1980.

Mount Cranmore developed a unique and interesting new lift called a Skimobile. A wooden road, or trestle, was built up the mountain and one-person cars were pulled up the trestle with a cable. The cars were colorful, eye-catching and loved by many people, but the Skimobile was slow and expensive to run. 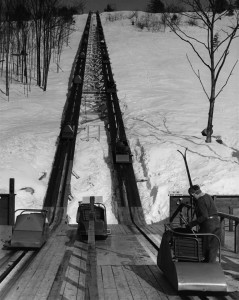 Cranmore’s Skimobile had small cars riding up a wooden trestle

Twenty years later, in 1958, New Hampshire was the first place in North America to have a gondola. A gondola is like a ski chair, but it is enclosed to protect skiers from harsh weather. Wildcat, in Pinkham Notch, installed a two-person gondola that lasted until 1999.

The ski tow made it possible for more skiers to use the ski trails than ever before. Two New Hampshire ideas made the slopes safer and more fun: a professional ski patrol and trail grooming.

There was a single ski patroller at Mount Hood, Oregon in 1937, but the first group of paid ski patrollers was hired at Cannon Mountain in 1938. 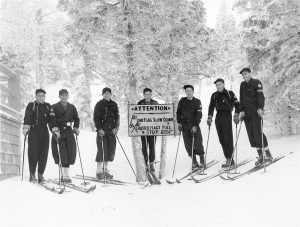 The Cannon Mountain Ski Patrol, the first professional patrol in the country

These twelve patrollers worked as guides in the summer and also worked to maintain the slopes in the winter. The first ski patrol director, Ken Boothroyd remembers the hard work:

We done [sic] all the maintenance work with shovels. . . .. We worked Monday and Tuesday shoveling all the way down the whole two miles and a third…

It took two days for the patrol to get one trail ready for skiing! The people at Mount Cranmore found a better way in 1940. They pulled tools originally used for farming behind small tractors. They dragged rollers and mats and even experimented with chemicals to prepare the snow for skiing. 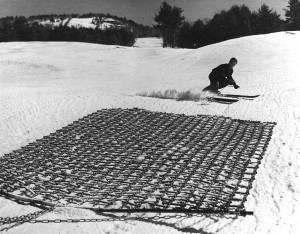 New Hampshire was important in American ski instruction because of Hannes Schneider and his way of teaching skiing, called the Arlberg technique. Hannes Schneider was from Austria, but was famous internationally for his teaching system. 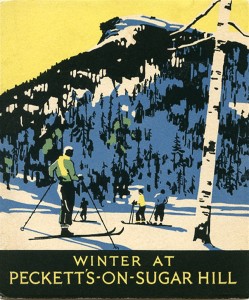 This brochure cover from Peckett’s shows skiers under the Old Man of the Mountain, which collapsed in 2003

The first Arlberg ski school in America began in Sugar Hill, at Peckett’s Inn, in 1929. Later, in 1935, Schneider sent one of his best instructors, Benno Rybizka to Jackson to teach skiing.

Hannes Schneider was a very important man in Austria in the 1930s. Because he was so important, the Nazi party wanted him to join them. 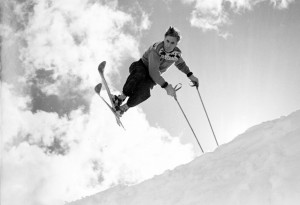 Hannes Schneider, who lived his last years in North Conway

He refused and in 1938 they put him in prison. An American businessman from North Conway, Harvey Dow Gibson, was able to convince the Nazis to release Schneider and his family. No one knows all the details about how Gibson was able to get Schneider released, but Schneider came to North Conway to be the skimeister in 1939. When he moved to North Conway, the town became the center of ski instruction in America.

Tuckerman Ravine, on the eastern side of Mount Washington, has many steep runs with very deep snow. Because it is about 3 miles away from a road, and no lift was ever built there, skiers still have to hike uphill to ski there. 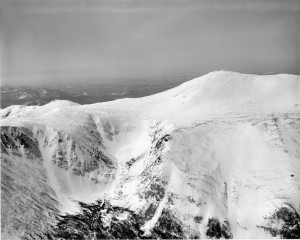 Tuckerman Ravine is the large bowl shown in this air photo

Expert skiers have tested themselves here since the 1920s up to today. A steep section at the top is called the headwall or the Lip. Charlie Proctor (the professor’s son) and John Carleton made the first known run over the headwall in 1931. Many people think Mary Bird, a famous racer and the first American woman ski instructor, was the first woman to ski the Lip.

In 1939 a race called the American Inferno was held through Tuckerman Ravine. The race was over 4 miles long and was won by a young instructor at Hannes Schneider’s ski school, Toni Matt. Toni planned to make turns to slow himself down on the headwall but instead went straight down at the steepest part! All the spectators were stunned and Toni Matt is still remembered for his incredible schuss of the headwall. 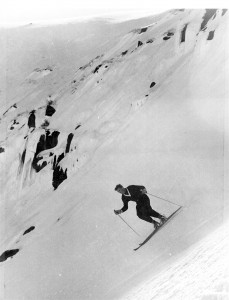 Tuckerman Ravine is dangerous not just because it’s so steep, but there is also a danger of avalanches. Walter Prager, a ski coach at Dartmouth, was worried about avalanches before a race in 1937. He sent members of his ski team to throw dynamite charges to trigger avalanches before they could hurt people. This was the first time explosives were used in the East to control avalanches.

Tuckerman Ravine has always been popular for “extreme skiing.” Brooks Dodge grew up at the trailhead leading up to Tuckerman Ravine. Brooks would ski for the United States in the Olympics in 1952 and 1956, but before that he was the first to ski new runs at Tuckerman. He was the first to ski at least a dozen new descents through steep, narrow gullies and chutes. Icefall, Dodge’s Drop, and Cathedral are three of these dangerous runs that expert skiers still use to challenge themselves.

Today we take for granted the hotels and second homes that grew around ski trails, but the first “Ski Villages” can be traced to New Hampshire. A ski village was planned and a cabin was built in 1936 on the Wapack Trail on Pack Monadnock. 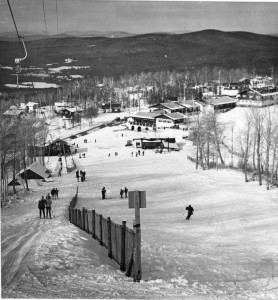 In the late 1940s an emigrant from Austria, Hubert von Pantz sold plots of land and chalets at the base of Cannon Mountain. He called this village Mittersill.

Sel Hannah, from Berlin, New Hampshire helped design trails all over New Hampshire in the 1940s. In 1947 he started a business, Sno-Engineering. 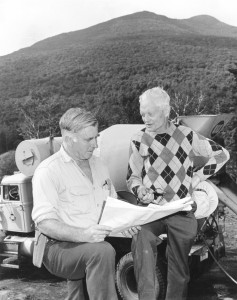 Sel Hannah, on the left, studies plans with Sherman Adams during construction of Loon Mountain

He, his partners, and his wife, Paulie designed and planned many ski areas all over the country. Because of their work ski area design and engineering is recognized as a profession today.

In 1956 there was an accident on a chairlift in Gilford, New Hampshire. The wire rope broke and eleven people were injured. One person died. This accident showed many people that the government needed to inspect and regulate chairlifts in ski areas. In 1957 the New Hampshire Passenger Tramway Safety Board was formed to develop a lift safety code. This board and the safety code they made became the model for most states with ski areas. 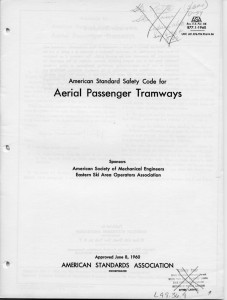 New Hampshire was a hub for skiing through the 1930s through the 1950s. The state helped promote the state through colorful maps, posters, and brochures. Later, Vermont and ski areas further west became more popular than New Hampshire.

Even so, skiing is still very important to New Hampshire today. In 2006-7 people spent over 700 million dollars in the state because of skiing. Ski resorts also employed over 17,000 people during that year.