The 17th annual Hannes Schneider Meister Cup Race will feature an untimed, up and down-mountain social nighttime ski tour and dinner for skiers on randonee and telemark gear as part of the opening festivities on Friday evening, March 1. Eastern Mountain Sports of North Conway will sponsor the event, providing alpine touring demo equipment for those who need it. Participants who want to take advantage of the demo offer should call the EMS North Conway store at 603-356-5433 to reserve gear or visit the store prior to February 28, 2012 so that they can be fitted with equipment. 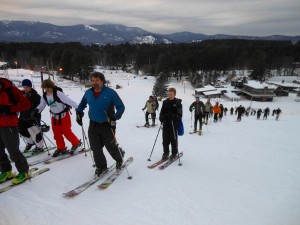 The 2012 EMS Randonee Night Tour leaves the Cranmore base area as twilight fades to night. Hannes Schneider, grandson and namesake of the Austrian skimeister, strides toward the camera in left center.

EMS was a pioneer in the retailing of nordic and backcountry skiing gear in the early 1970s when the concept of cross-country skiing was becoming popular but not many alpine ski shops were prepared to cope with the surge in interest in the new style of skiing. The EMS store in North Conway became a center of cross-country sales and information in that period and for several years revived the fading Intervale Ski Area as a nordic center. Over the years other retailers caught up to EMS’ early lead, but several of the company’s massive mail order catalogs from the early 1970s in the New England Ski Museum’s collection give evidence to the breadth of their ski selection in the early years of nordic skiing’s popularity.

The connection between human-powered climbing on skis and the man honored by the event, Hannes Schneider, is clear and direct. Schneider developed his techniques before the invention of ski lifts, and as a practiced and passionate backcountry skier in his native Arlberg region of Austria, used uphill alpine touring techniques daily himself and taught them to his students. Schneider is considered the founder of ski instruction as it is still structured today, and as an originator of the mountain resort industry because his ski school sparked unprecedented prosperity to his mountain hometown of St. Anton, Austria.

Registration for the EMS Randonee Night Tour begins at 4 PM on Friday March 1, and costs $25, including a dinner buffet. Beginning at 5 PM, tour participants will ascend a route to be selected and marked by Cranmore patrollers, and follow a designated route down the mountain’s alpine trails. The Meister Hut at the summit of Cranmore will be open and hot chocolate available to the group. All skiers will be urged to make their descent by 7:00 PM so as not to miss the hearty alpine buffet that coincides with the opening reception of the Meister Cup in Zip’s Pub and Grill.