April 11, 2006 marked the 75th anniversary of the first documented descent of the entire Tuckerman Ravine Headwall. On that date in 1931, two Dartmouth skiers and Olympic veterans, Charles N. Proctor and John Carleton, decided on the spur of the moment to attempt the Headwall from above. All previous skiers, so far as is known, had stopped well short of topping out over the steep-angled snow slope that forms the end wall of the classic glacial cirque.

A group of seven from the Wildcat Ski Patrol, EMS Climbing School and New England Ski Museum happened to make their own ski descent of Mount Washington on the anniversary date in 2006 in near-ideal weather and snow conditions. 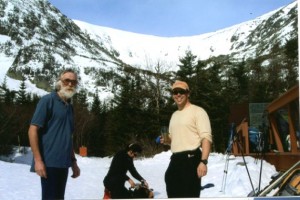 The group, which included alpine, telemark, and AT skiers and a snowboarder, climbed to the summit through the ravine and descended via the East Snowfields, traversed to the Southeast fields, over the Lip, and down the Sherburne trail to its closure about one half mile from Pinkham Notch. Snow conditions below the ravine seemed very thin for a normal winter, with the Little Headwall completely gone, but considering the past winter was one of the least snowy on record the snowpack in the ravine itself is respectable. 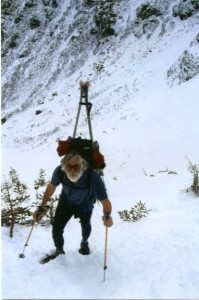 Topping out on the Headwall

Relaxing in the parking lot at Pinkham Notch at the end of the day, the party raised a glass to Proctor and Carleton who made their descent on 7-foot wooden skis and single-layer leather boots, in contrast to the current 170 or 180 cm shaped skis.

According to a transcript of a 1980 interview with Rockwell Stephens in the collection of the New England Ski Museum, there were five or six skiers in the party with Carleton and Proctor on that day in April.

“Carleton had been a Rhodes Scholar and captain of the Oxford-Cambridge Ski Team and when he came back to this country, why he was tops in skiing. He could really ski. He and Charley had looked up at the Headwall and said, “That looks like kind of fun, we ought to try and ski that”, and up they went. They traversed up and disappeared over the top, started down, both of them were doing jump turns. John fell high up but had recovered, and Charley came all the way down right side up. I said, “what the hell did you jump turn for?” “Well, it was breakable crust up there.” So the Headwall was run for the first time and christened in the worst possible conditions. That was a great day.” 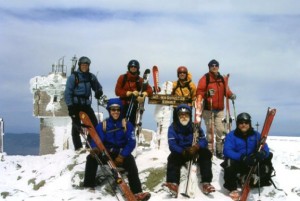 Both Proctor and Carleton would have major impacts on the development of skiing in the US. Proctor became the first real ski professional, designing many ski trails in the White Mountains that would be cut by the Civilian Conservation Corps in the 1930s, including the Wildcat and the John Sherburne Trail, the ski trail that is still used today by thousands to ski down from Tuckerman Ravine to Pinkham Notch. He was instrumental in convincing Averill Harriman to proceed with plans for the first chair lift for Harriman’s Sun Valley resort, and was the manager at the Badger Pass ski area in Yosemite for years. Carleton, a Manchester NH attorney, was a strong advocate for the cutting of the CCC ski trails, and was the spark plug behind several of the development upgrades to Cannon Mountain in the 1950s and 1960s. 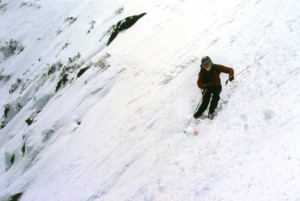 Ian on the Lip