A record field of more than 300 skiers participated in the 6th Annual Bretton Woods Nordic Marathon to benefit the New England Ski Museum on March 8, 2014. With major support from sponsors including the Omni Mount Washington Resort, Audi of Stratham, Alpine Clinic and SWIX the event incorporated competitive, recreational and social elements to create an all day celebration of Nordic skiing. 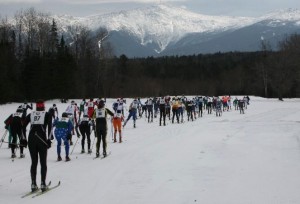 Skiers selected from two distances, a full 42 K marathon and a 21 K half-marathon. Both events were in the classic technique. At the front of the pack were collegiate racers and full-time skiers followed closely by top junior and master skiers. Notable at this year’s event was a group of 15 skiers from the Ottawa-based Chelsea XC Masters.

First across the finish line was Dartmouth College ski racer John Caldwell who won the 21K race in a time of 1:08:34. He was followed by Mitch Harris of Portland Nordic and Ben Allen who skis with the Maine Winter Sports Council. The first woman was Emma Donohoe who skis for Colby College in a time of 1:18:09. Her closest competitors were Anna Witkowski and Tess Braddish who ski for Stratton Mountain School.

Cam Woodworth, another Dartmouth skier, won the 42K Marathon completing the course in 2:05:37. He was followed closely by two Williams College skiers, Vanya Rybkin and Kalle Jahn. Robyn Anderson who races out of the Stowe, Vermont, on the VTXC Team won the women’s Marathon with a time of 2:29:58. Hannah Miller from Bowdoin College was second and Elissa Bradley of Portland Nordic placed third. Cash prizes for the top five men and women in the 42 K Marathon created heated competition at the finish line, especially in the men’s division where the top five men were less than three minutes apart and the top four all finished within just over 60 seconds.

In addition to the marathon there was also a Bill Koch (Youth) League event in three distances, 1.5 K, 3 K and a 100 Yard Lollipop race for the youngest. Skiers in the full and half marathon ranged in age from eight to 80.

The event is an important fund raiser for the New England Ski Museum and it also showcases the Museum to skiers from across the northeast. More than sixty Ski Museum volunteers worked alongside Omni Mount Washington Resort Staff to make the event a success.