CONWAY — Local fourth-graders are getting to be part of a milestone in local ski and economic history this week.

On Monday, students from Jackson Grammar School and Josiah Bartlett Elementary got to ride the Conway Scenic’s Valley Train, then re-enact at the North Conway station the arrival of the late Austrian skimeister Hannes Schneider and his family who were rescued from Nazi custody to come and teach skiing at Mount Cranmore 82 years ago. 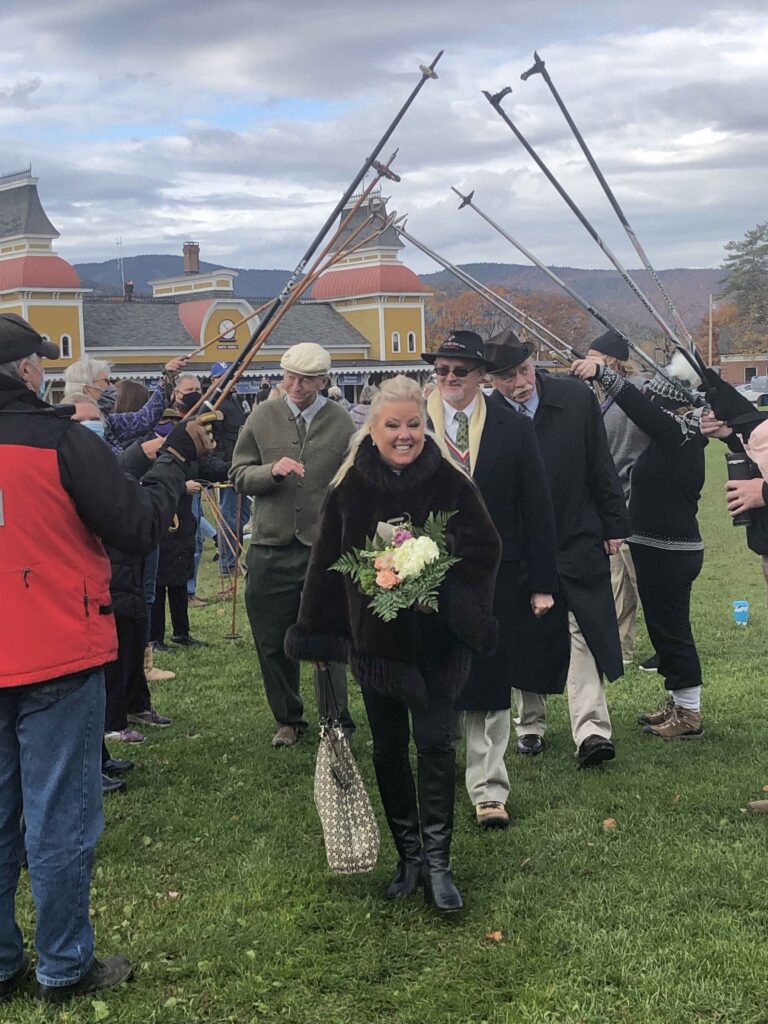 Christoph and Hannah Schneider, in front, and Tom Eastman and George Cleveland reenact the arrival of Hannes and Ludwina Schneider in North Conway in February, 1939

Josiah Bartlett Elementary School Principal Joe Yahna was impressed. “This is incredibly important to have our young people connect with the rest of our community around the ski and snow sports that connect all of us in this valley,” he said as he and the students rode the train from Bartlett to North Conway.

The kids were impressed, too. “I love history. And I really liked riding the train,” said JBES student Dylan Calabro. His classmate Cegan Zawadzki added, “I like history, too!”

Christoph Schneider of North Conway and St. Anton Am Alrberg, Austria, with wife, Hannah Sullivan Schneider, portrayed his grandfather Hannes and his grandmother Ludwina Schneider. “To have the community continue to honor our family’s contribution to local ski history is really something, all these years,” Christoph said. 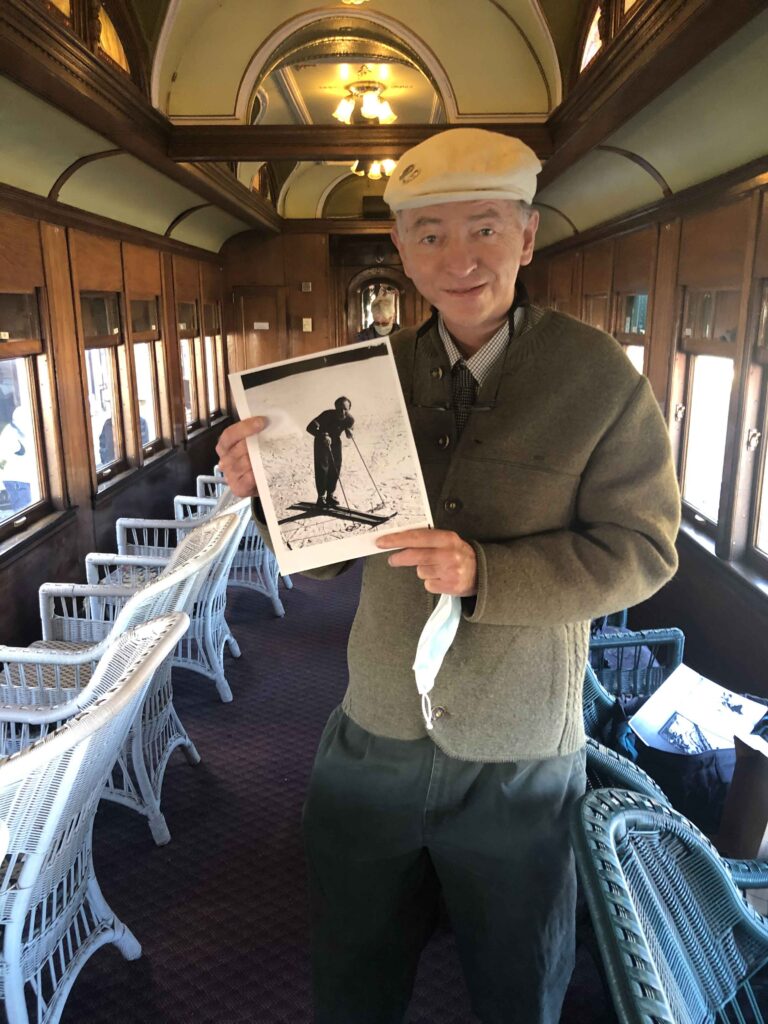 Joining them were myself (portraying early Austrian ski instructor Benno Rybizka, a man whose last name one Boston sportswriter once wrote was easier to “sneeze than pronounce”) and George Cleveland as financier and Cranmore developer Harvey Dow Gibson (1882-1950). 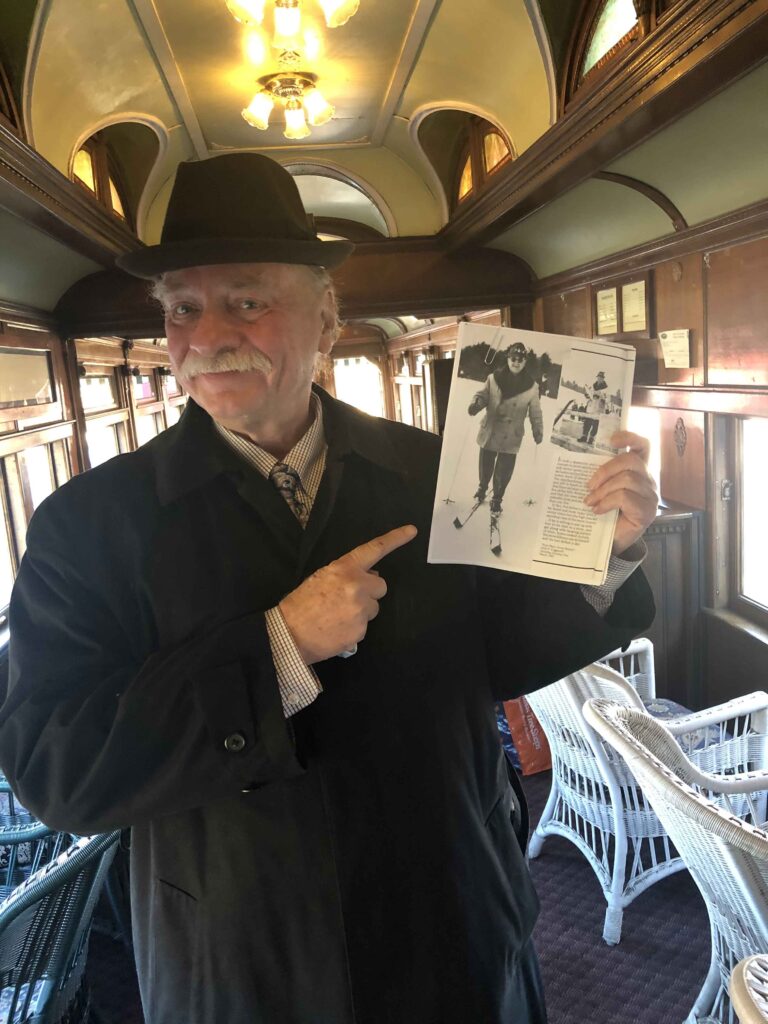 We passed under an arch of ski poles provided by 50 Eastern Slope Ski Club volunteers. Stefi Reed Hastings — daughter of Eastern Slope Ski School and Carroll Reed Ski Shops founder Carroll P. and Kay Reed — of Fryeburg, Maine, and I also donated copies of my 2013 book, “The History of Cranmore Mountain,” to the five local elementary schools to aid in passing that ski history along. 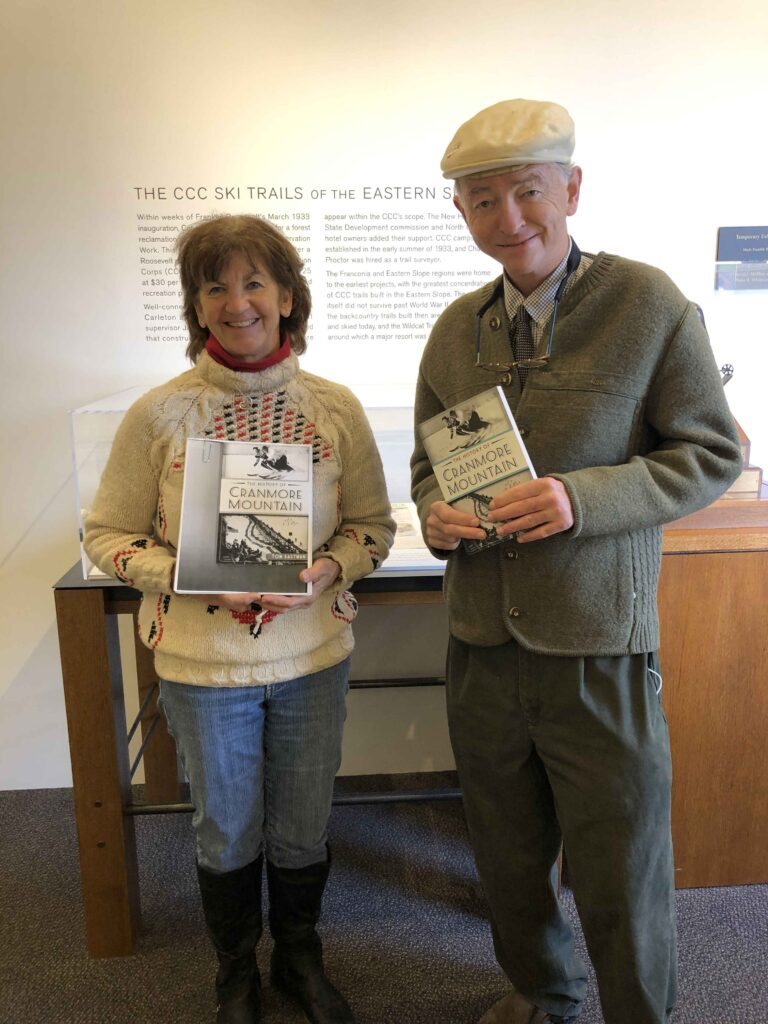 I related the story about Rybizka’s last name to the students both on the train and at an outdoor at the gazebo in the park Tuesday morning. It was heartwarming to be able to share the valley’s great ski history with the attentive students. They seemed to enjoy imitating the story about “bend ze knees,” as Schneider had instructed his ski students.

Christoph, playing his grandfather, told them how his friend Mr. Gibson made it possible for his family to come to America. And Cleveland (as Gibson) shared how he was “the richest man in town, who went to New York City to be a banker but who never forgot his hometown, North Conway.”

Asked to comment on the Conway Scenic’s role, Brian Solomon, CSRR events and marketing coordinator, said the railroad was happy to play a part. “It’s great to share this rich story with the kids,” said Solomon, who was serving as stationmaster.

After the re-enactment, students get to visit the museum and take part in a ski history scavenger hunt. They next go to the North Conway Community Center for a STEM project involving making pipe cleaner skiers/snowboarders who compete in a race on a pretend ski mountain. Betsy Packard and Jan Quint are lead volunteers there, Newton said.

After that, they go to the North Conway Country Club where they are served healthy snacks and participate in an art project coordinated by NESM volunteer Kathy Baltz. “Without the support of all the New England Ski Museum volunteers this project would not be possible,” said Newton. 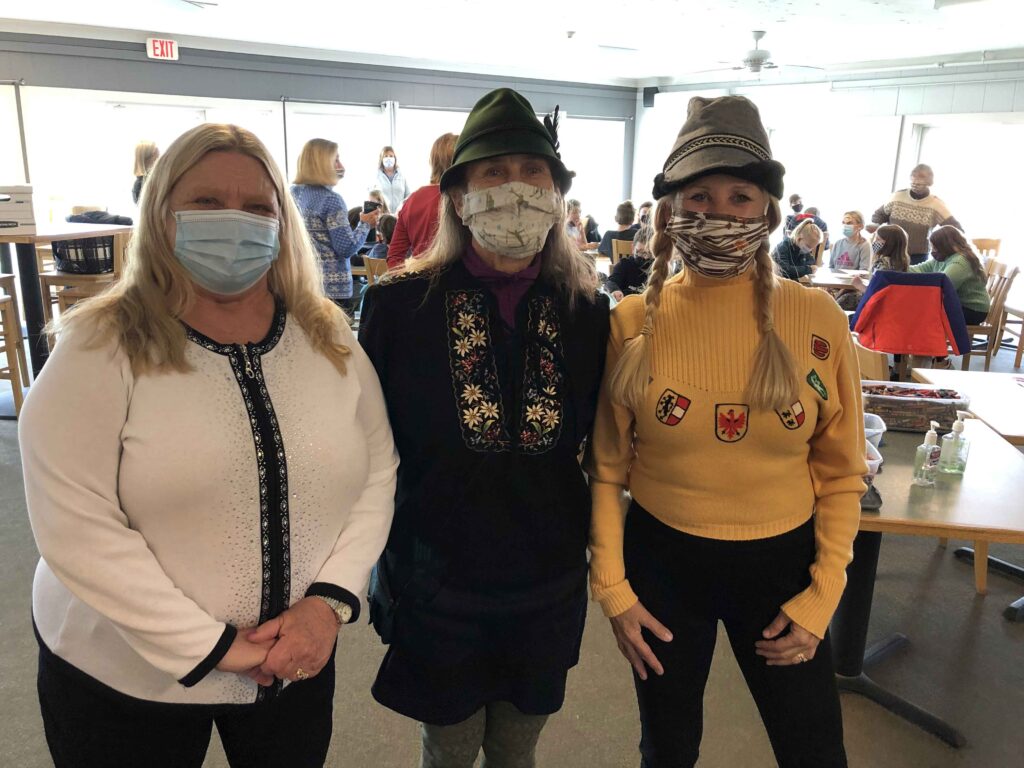 Under the plan worked out with SAU 9 schools, students will create ski-history-related projects that will be presented Nov. 30 at an open house from 4-7 p.m. at the ski museum and community center. 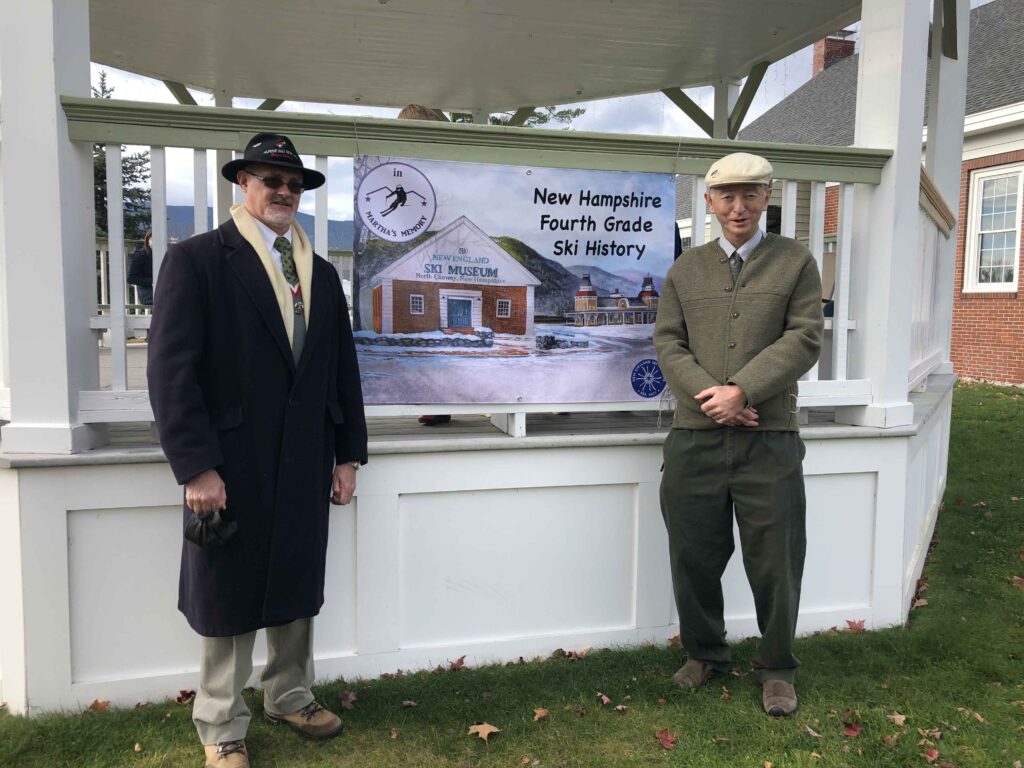 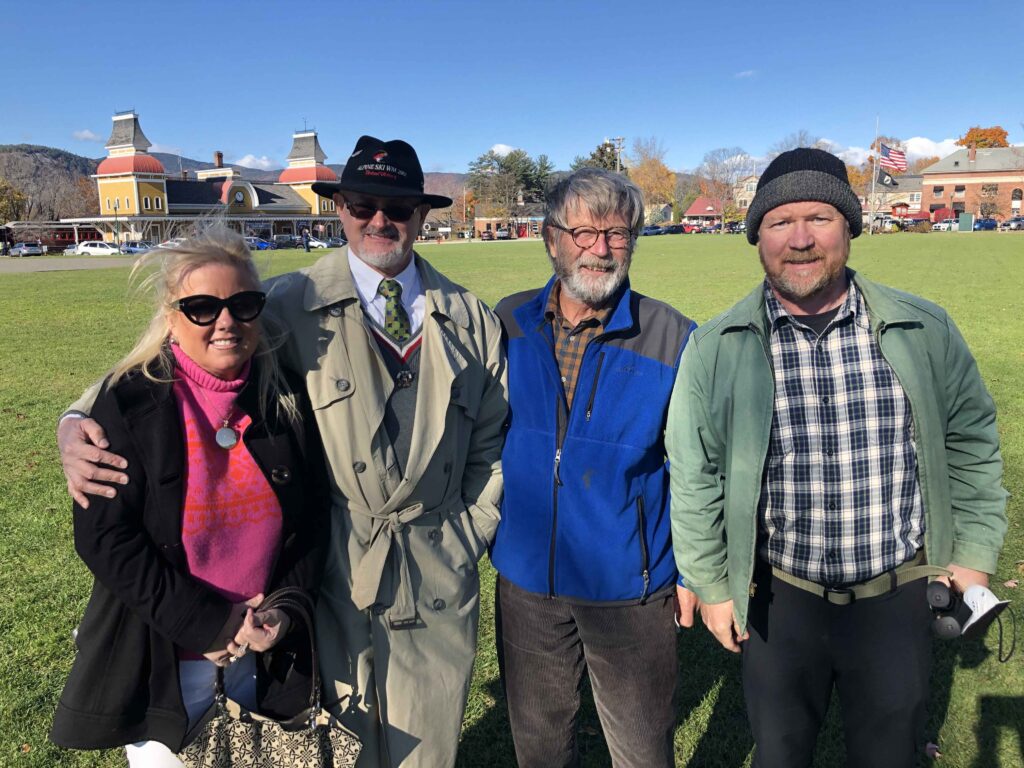 Hannah and Christoph Schneider with Ken Corrock and Brett Coughlin

Newton said the main thrust of the effort is to honor late local ski racer Martha Coughlin Corrock, who died at age 66 last May in Challis, Idaho. “When Martha was a young skier here in the valley,” said Newton, “she and Kevin Sullivan were selected in a contest to go to St. Anton am Arlberg, Austria, where Hannes Schneider was from. She always talked about what a life-changing event that was for her.”

Now, this event not only honors the Schneiders and skiing but also Corrock. Present at this week’s events were Martha’s husband, Kenny Corrock of Sun Valley, Idaho, and her nephew, Brett Coughlin, of Maryland. “Martha was an inspiration to all of us. She was a spark,” said Coughlin on Monday. “Our family wants to thank the community for doing this in her name.”

Newton and others hope that this will become an annual event.