Backcountry skiing—skiing without mechanical access via ski lifts—is enjoying a new popularity made possible by the ready availability of lightweight, sophisticated alpine touring equipment. Many skiers have been attracted to venture away from established ski resorts with their networks of ski lifts, and ski uphill with climbing skins and adaptable bindings to access ski trails and newly-trimmed glade lines through the forests of northern New England. Though the equipment and some venues are new, the concept is ancient. The New England Ski Museum’s 2019 annual exhibit, Before and Beyond the Lifts: Sketches of Backcountry Skiing, located in the Museum’s Franconia Notch branch, revisits the origins, equipment, legends and lore of human-powered skiing.

Before the advent of ski tows and lifts in the 1930s, of course, all skiing was done without mechanical access. As early as the 1600s in Europe, people in the Duchy of Crain, now part of Slovenia, were getting around the Bloke Plateau in winter on short, wide skis using long single poles for balance. The only known Bloke skis in existence today are replicas, as most were destroyed in World War II by Nazi occupiers fearful of their use in guerilla operations by the locals. 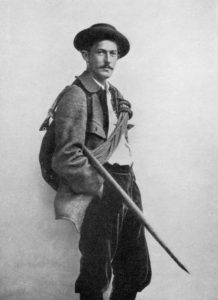 In 1883 in Davos, Switzerland, young Wilhelm Paulcke, a German whose parents had moved to the town then known for its sanitariums, used Norwegian skis for the first time, setting the course of his life in which he became one of the first ski explorers. In 1896 Paulcke and three companions made the first ski climb of the 10,919-foot Oberalpstock in Switzerland, then in 1897 he made the first of what would be many classic traverses of the Alps on skis when he crossed the Bernese Oberland on a multi-day expedition. 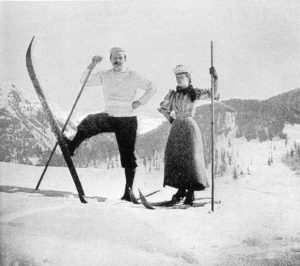 Literary figures Arthur Conan Doyle and Ernest Hemingway both had backcountry ski adventures, and Conan Doyle’s article in the Strand magazine about his 1894 traverse above Davos predicted that soon hundreds of English tourists would come to the Alps in winter, a predication soon enough true. Hemingway spent the winters of 1925 and 1926 in the Montefon valley in Austria, and skied extensively in the Silvretta region. Coincidentally, both writers were arguably at transitional times in their lives; Conan Doyle had just killed off his fictional hero Sherlock Holmes, and Hemingway would soon divorce his first wife Hadley and marry his second, Pauline.

In the northeastern U.S., the Depression-era Civilian Conservation Corps (CCC) cut miles of new ski trails in the mountains of Vermont and New Hampshire just as ski tows were being contrived. These CCC ski trails expanded the horizons of skiers, who had previously been limited to existing logging roads and pastures. A number of the CCC’s trails were built on mountains over 4,000 feet, whetting appetites of skiers for expanded vertical drops. 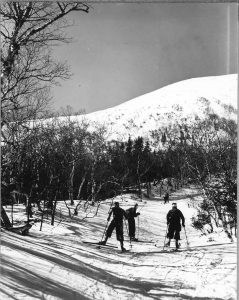 Once ski lifts were constructed beginning in the 1930s and 1940s, most skiers shied away from what quickly became the old-fashioned way of accessing ski runs by climbing on skis, and the ease of uphill transport rapidly expanded the skier population. Even in the 1950s though, while most were riding ski lifts, scattered groups explored new country on skis. Augusta Maine native Bill Briggs led a party of four Dartmouth Outing Club climbers on a 1958 traverse of the British Columbia backcountry from the Bugaboos to Rogers Pass. Barry Corbet, a member of the party, would become known as a ski filmmaker and namesake of the Teton test piece Corbet’s Couloir. Briggs became known for daring first ski descents of Teton peaks like Mount Moran and, in June 1971, the Grand Teton.

Several others with New England connections who have had big impacts on ski mountaineering are featured in the exhibit. Part-time Franconia resident and museum member Steve Shea was featured in the Oscar-nominated film Fall Line skiing the second descent of the Grand Teton in 1978. The short film is available online, and gives a visceral sense of the extremity of big mountain skiing.

Chris Davenport skied in the youth race program at Attitash, then raced at Holderness and the University of Colorado. He then focused on big mountain ski competition, winning first place in the 1996 World Extreme Skiing Championships. In 2006 he made ski descents of all 54 Colorado peaks over 14,000 feet in a single season. On a 2011 expedition to Mount Everest, Davenport and Neal Beidleman took advantage of exceedingly rare snow conditions to ski from the 24,000 foot level on the mountain’s Lhotse Face.

As ski technology improved with deeper sidecuts and shorter lengths, skiers’ abilities increased, and some looked beyond ski area boundaries. Certain ski areas had long trimmed forest growth between trails to form glades for tree skiing, and that trend grew in the last two or three decades. Some individuals elected to take up unauthorized cutting and trimming on lands beyond ski area boundaries, and this trend seemed to culminate in 2007 when two men were arrested and convicted for clearing an illegal 2,000-foot strip up to 65 feet wide near Jay Peak, Vermont.

Within the last half decade, groups of backcountry skiers have organized and obtained authorization from private landowners, state and federal agencies to create backcountry ski glades in a growing number of sites in Vermont and New Hampshire. The Vermont Backcountry Alliance, aligned with the Catamount Trail Association, and the Granite Backcountry Alliance have both enlisted hundreds of hours of volunteer help to trim selected tracts of forest with guidance from professional foresters and land managers, creating backcountry ski venues that meet a rising demand for such locales. Some who are entranced by this new wave of skiing without ski lifts are likely unaware of the sport’s long history, an unfamiliarity that the Museum’s new exhibit seeks to remedy. 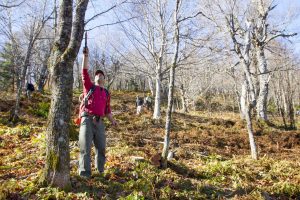 Before and Beyond the Lifts: Sketches of Backcountry Skiing will be on display at the Franconia branch of the New England Ski Museum from June 20, 2019 through May 2020, and in a concise version in the Museum’s Eastern Slope Branch in North Conway beginning in the summer of 2019. 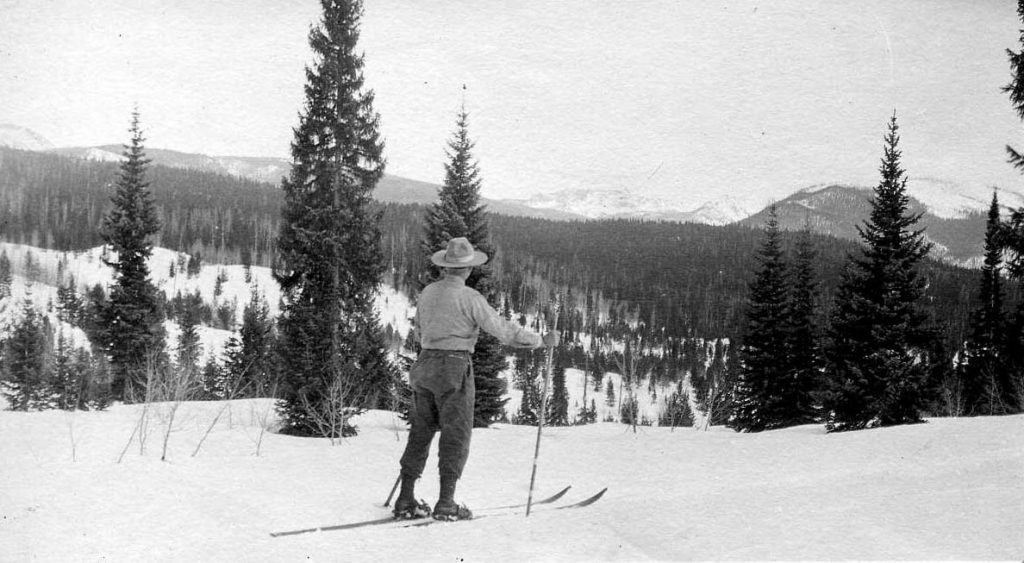 Skiing near Steamboat Springs, Colorado about 1918