Today’s downhill skiing, cross country, telemark and snowboarding sits on the shoulders of a rich 150-year-plus modern-era history of sliding downhill … and going back up again.

The nonprofit International Skiing History Association (ISHA) recognizes the sport’s heritage and honors organizations at the forefront of preserving this rich history. On Nov. 17, 2018, ISHA presented its second Steward of Skiing History Award to the New England Ski Museum, based in Franconia, N.H. Dedicated to “Preserving the Future of Skiing’s Past,” since 1977, the museum directors, members and staff have worked hard to collect and display objects that tell the story of skiing.

In accepting the honor, executive director Jeff Leich said, “Often the work of organization and preservation takes place behind the scenes, and it is heartening to have ISHA understand and acknowledge the museum’s role in this important aspect of our mission.” 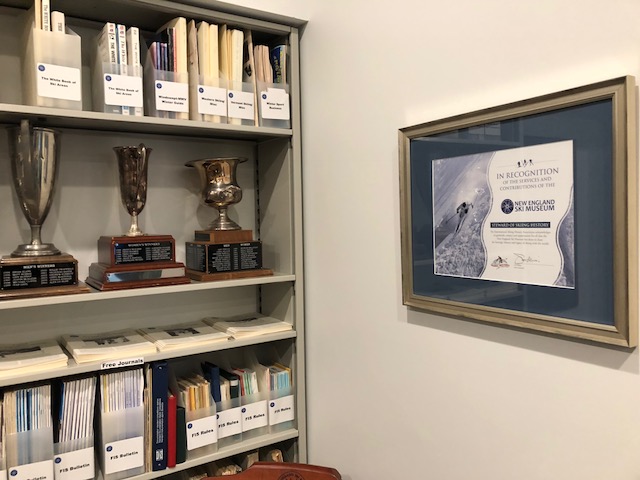 The Steward of History plaque is displayed in New England Ski Museum’s library at its Eastern Slope branch in North Conway, N.H.

Adds ISHA president Seth Masia, “With its academic-quality historical research and more than 26,000 curated items in its collections, the New England Ski Museum is an incomparably valuable institution. Whatever we can do to support their work supports all of us who hold the sport’s history so close to our hearts.”

About The New England Ski Museum:

New England Ski Museum collects, preserves, and exhibits examples of equipment, art, and artifacts relating to ski history and the 10th Mountain Division. Formed in 1977, the non-profit organization opened to the public in 1982 in Franconia Notch, N.H. at the site of the first aerial tramway in the country. In 2003, the museum built its Paumgarten Building in Franconia to house its growing collections, and in February 2018 opened a second museum branch in North Conway, NH. Members of the museum are located in 35 states and 11 countries. The Museum publishes its quarterly Journal of the New England Ski Museum for its members and visitors.

The International Skiing History Association (ISHA) is a 501(c)(3) nonprofit organization whose mission is to preserve and advance the knowledge of ski history and to increase public awareness of the sport’s heritage. It is recognized worldwide as an important resource for comprehensive, accurate information on the history of ski resorts, personalities, equipment, technique and events. ISHA’s 1,500 members – including resort and industry leaders, World Cup and Olympic racers, leading authors and historians, and passionate skiers from two dozen nations – share a love of the sport and its rich past. Six times a year, the association publishes a bimonthly magazine called Skiing History.